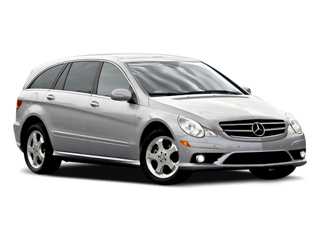 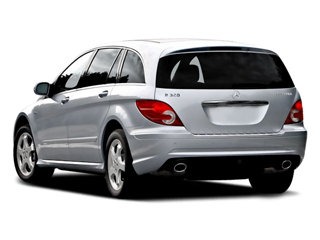 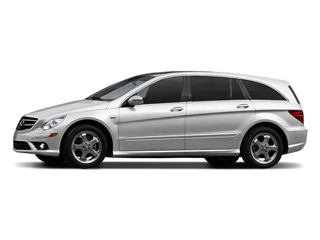 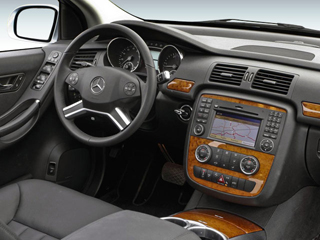 The R-Class is unique among sport-utility vehicles. It features a tremendous amount of interior space in this class--and it's one of the few vehicles with a third row that can accommodate adults in posh comfort. Meanwhile, the new BlueTec model is a new eco-friendlier alternative families, with trailer-pulling torque that's on par with the stronger gasoline V-8s.

TRANSMISSION
7-Speed A/T
ENGINE
3.5L DOHC 24-valve V6 engine
FUEL ECONOMY
15 CTY/19 HWY
The R-Class comes in two models--both powered by V6 engines but very different in personality. The R350 comes with a 268-horsepower, 3.5L V6 engine, while the R320 BlueTec model gets a 3.0L turbodiesel V-6 making 210 horsepower. What makes the R320 BlueTec's engine so impressive is that it produces 398 pound-feet of torque--a rating on par with large-displacement gasoline V-8s, and enough to pull a 3500-pound trailer with authority.

Both engines come with a seven-speed automatic that adapts quite well to either smooth, relaxed boulevard cruising or twisty, hilly roads and Mercedes-Benz 4MATIC all-wheel drive, which delivers power to the wheels with the best traction, is now standard on both models.

The gasoline R350 is rated at 15 mpg city and 19 highway. Fuel economy is a strong point for the R320 BlueTec. It carries EPA estimates of 18 mpg city, 24 highway. To yield its especially clean operation, free of the soot and smoke that plagued diesels of the past, the BlueTec uses a host of modern emissions equipment and requires periodic fills of AdBlue solution with major service intervals.

With a 4-wheel independent suspension and an air suspension system, the R-Class strikes a good balance between comfortable ride, handling response, the needs of hauling heavy loads or people or cargo and possible towing. Four-wheel vented disc brakes bring good stopping power to the quite heavy R-Class.

Comfortable seating for six is standard on the R-Class, with enough space for most adults in the second and third rows. Seven-passenger seating is optional. Thanks to especially long rear doors, the third-row seats are much easier to access than in most SUVs. Assisting the seating configuration, there are up to 40 inches of space between the first two rows and up to 30 inches between the second and third rows. According to Mercedes-Benz, cabin space in the R-Class represents 65 percent of its total volume.

As can be expected on any Mercedes-Benz, a full range of safety features are included, such as side airbags for the first and second rows, side-curtain bags for all three rows, and electronic stability control with rollover sensors and a trailer stability assist feature. The PRE-SAFE feature, which primes safety features if a crash is anticipated--by raising windows for example--is also standard.

For 2009, a new version of Mercedes-Benz' COMAND screen-driven menu system is installed in all R-Class models. COMAND now has enhanced voice control and uses a colorful 6.5-inch screen. The system includes a Bluetooth interface with a new SD memory-card slot. Also available are an iPod interface, HD radio, Sirius Satellite Radio and the standard six-disc changer can play DVD and MP3 formats. An improved navigation system is optional and now includes Zagat restaurant ratings as well as live traffic data from Sirius.

Even though the R-Class comes equipped as a luxury vehicle, there are plenty of other noteworthy options, include a high-end harman/kardon sound system, music hard drive, a power liftgate, tri-zone climate control, rear-seat entertainment system with wireless headphones, dual screens, dual sources and remote controls.;