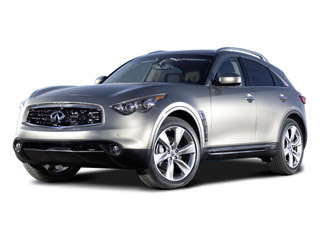 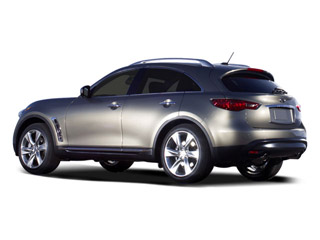 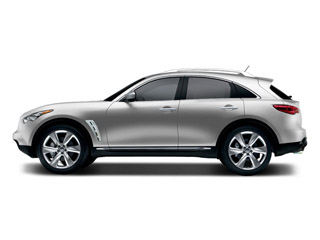 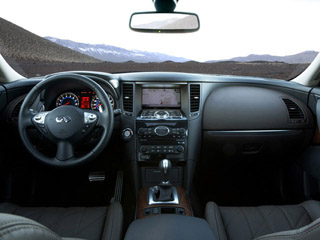 These SUVs are short on utility but high on sport -- as in sports car. The FX lacks a third-row seat and real cargo space, but it makes up for it in horsepower and handling. The base level FX35 has a 3.5L V6 engine that turns out 303 hp (28 more than last year) and 262 lb-ft of torque (6 less than last year). The new FX50's 5.0L V8 has 390 hp on tap and 369 lb-ft of torque, making it INFINITI's most powerful engine ever. Its off-road capabilities may be limited (no low gear, for example), but it screams through the twisties and delivers a high level of interior features, many of which are standard.

TRANSMISSION
7-Speed A/T Transmission w/Dual Shift Mode
ENGINE
3.5L DOHC V6 engine
FUEL ECONOMY
16 CTY/23 HWY
While it may look like an SUV, the INFINITI FX behaves more like a sports sedan. The original incarnation of the FX, which was on the market from 2003 to 2008, had a stiff ride and impressive performance; in this year's overhaul, INFINITI improved the ride and upped the performance even further.

Before 2009, the FX35 was the only version available, in rear-wheel or all-wheel drive. This year, the FX35 gets a burly buddy in the FX50, which comes with a 5.0L V8 and all-wheel drive only. INFINITI's AWD system reacts to loss of traction by supplying power to whichever wheel needs it, then defaulting to rear-wheel drive under normal conditions. Both versions use a new 7-speed automatic transmission with paddle shifters, and both have dual intake and exhaust.

The weight of the FX is balanced in the center for better handling, while Continuous Damping Control, available in the FX50 Sport package, stiffens or softens the suspension, depending on the requirements of the driver. The Rear Active Steer system, also in the Sport package, actively turns the rear wheels on cornering.

INFINITI is known for its quality interiors, and the FX is no different. Optional sport seats with thigh support extensions and adjustable side bolsters help support the driver when cornering . Though it was built with sport driving rather than sport utility in mind, the rear seats do fold flat, with a 60/40 split. The FX35 and FX50 come with power everything standard, including moonroof.

As for luxury touches, maple wood interior details are available for the FX35 and standard on the FX50. The FX50 also comes with INFINITI's Advance Climate Control System (ACCS), which actively cleans the air of allergens and exhaust fumes. The Around View Monitor, optional on the FX35 and standard on the FX50, improves on the back-up camera with four exterior cameras connected to the display in the center console to provide a 360-degree view. An 11-speaker Bose sound system comes standard, with iPod interface and 9.3GB hard drive optional.

INFINITI takes its safety technology seriously, too. Intelligent Cruise Control adjusts the speed of the FX to match traffic, and Distance Control Assist helps the driver release the throttle and apply the brakes to keep a safe distance between the FX and the car in front of it. It also uses Lane Departure Warning and Lane Departure Prevention to help wandering drivers, and Forward Collision Warning and Intelligent Brake Assist to reduce the likelihood or impact of a collision. In addition, there's standard traction control, stability control, and air bags all around.;