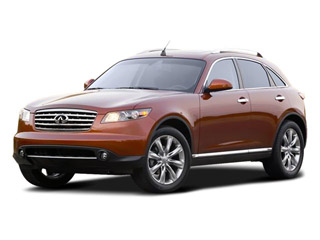 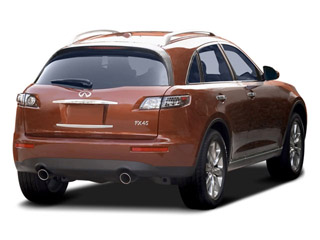 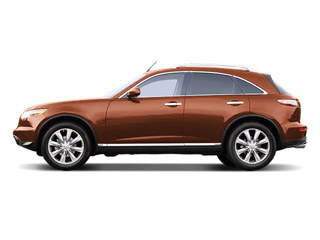 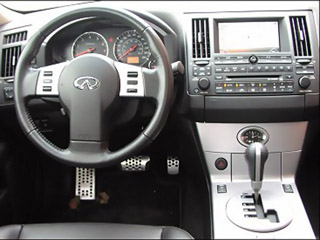 The 2008 INFINITI FX is a stylish, performance-oriented crossover SUV with a little bit of sports car influence. It's available with either V6 or V8 power, and emphasizes on-road handling versus off-road ability. With either engine, the FX is quicker than most other performance SUVs in its class and has a nearly ideal weight balance for safe, quick maneuvers. The FX also stands out from the competition by offering several unique technology and safety features such as the available lane departure warning system and intelligent cruise control with preview braking.

TRANSMISSION
5-Speed A/T Transmission w/Dual Shift Mode
ENGINE
3.5L DOHC V6 engine
FUEL ECONOMY
15 CTY/22 HWY
The INFINITI FX is again available in two models. The FX35 comes with a 275-horsepower, 3.5L V6 engine, and the FX45 gets a 320-horsepower, 4.5L DOHC V8. Both engines are mated to a five-speed automatic transmission with a manual shift mode. The FX35 can be had with either rear-wheel drive or all-wheel drive; the FX45 comes only with all-wheel drive. The all-wheel drive system automatically transfers more torque to the wheels with the most traction and can send up to 50 percent to the front wheels as needed.

Handling and on-road performance--as opposed to off-road prowess--is emphasized in the FX. It's based on a toughened version of the FM platform that also underpins INFINITI's rear-wheel-drive performance sedans and coupes, and with the engine mounted just behind the front axle (rather than in front as in most vehicles); the FX has a near-optimal 52/48-percent weight distribution front to back. This brings more stability during quick emergency maneuvers and on curvy roads, also aided by the vehicle dynamic control (VDC) stability system, which is standard on all FX models. A front independent strut suspension and multi-link rear suspension are new for 2008.

Four-wheel anti-lock disc braking with brake assist is standard across the line, and models with the optional intelligent cruise control system, which can vary speed to maintain a safe following distance with the car ahead, also get the new preview braking feature, which senses the distance and closing speed of vehicles ahead in the same lane and anticipates the need for optimal braking power, priming the system for when the driver steps on the pedal.

Unlike many other SUVs its size, there is no available third-row seat, but the FX's interior accommodates five adults, and the back seats fold forward with quick release levers for an expanded cargo area. There are also three under-floor cargo compartments to conceal smaller, valuable items.

Both FX models include front side-impact air bags and side curtain air bags with rollover protection for all outboard occupants.

Climate control, an information display, auto up/down front windows, and steering-wheel-mounted controls are standard on the FX35, along with an iPod interface, for the standard 300-watt, 11-speaker sound system with six-disc CD changer. The FX45 adds a sport suspension, 20-inch wheels, aluminum roof rails, automatic headlights, a Bluetooth hands-free phone feature, a sunroof, a dark chrome grille, power folding exterior side mirrors, and more distinctive wood and aluminum interior trim plus aluminum pedals. A V6 Sport Package brings some of these upgrades to the FX35.

There's also a Lane Departure Warning system available on the FX. The system uses a small rear-mounted camera to identify standard lane markings. When traveling faster than 45 mph, the system can send a warning if it suspects that the driver is drifting out of the lane. The system can be manually canceled and is temporarily disabled with the turn signals.

Many available options are packaged together; for instance, the navigation system, lane departure warning system, and intelligent cruise control are offered in the Technology Package.;